I wouldn’t necessarily describe my travel style as super sight-seeing oriented. I like to see stuff, but I usually don’t arrive armed with my fanny pack and maps, with a minute by minute itinerary and a list of 15 sites I want to cram into the day before lunch. As a budget traveller, I’m also wary of paying a slew of entrance fees to roam tourist traps with hundreds of other travelers. However, Istanbul has too many incredible historic sites to not play the tourist. Entrance fees to sites usually cost somewhere between 20-30 Turkish lira, and you’ll want to get to as many as possible. I would recommend budgeting around 100TL for entrance fees to the sites, they are well worth it. When I was just there, the dollar was one to three against the lira. Roughly 30 bucks to visit all these amazing sites is money well spent, in my opinion. If you have to scrimp somewhere else so that you can get in to see, do it. It’s worth the ticket price and the inevitable wait in the lines.

The first site I went to in Istanbul was the Hagia Sophia. A UNESCO World Heritage site and one of Istanbul’s most famous sites, the monument has a long and convoluted history. What started out as a church became a mosque, then a museum, and its status as such today is still contested.

The Hagia Sophia was first built in 360 during the Byzantine Empire, was burnt to the ground once, rebuilt, burnt to the ground a second time, and then finally, the structure that stands there today was built in 532. Then, it was a church and was at the heart of Orthodox Christianity for nearly a thousand years.

In 1453, Constantinople (today, Istanbul) was taken over by the Ottoman Empire, and the Hagia Sophia was converted into a mosque and restored the crumbling structure (not without lots of violence and conquest first, though). The Hagia Sophia served as a mosque at the center of the Ottoman Empire until 1935, where Kemal Ataturk in a wave of secularization across Turkey, turned it into a museum. Today, it is the second most visited museum in Turkey.

The building’s status is still under contest today. In Turkey’s Muslim-majority population, there are strong calls for it to be opened as a mosque again, and just this past spring, there were protests to reconvert it to a mosque. At present, there is a small prayer section cordoned off for museum workers of all faiths to worship, and the athan plays from the minaret twice a day for Muslim prayers.

Beyond its beauty, the Hagia Sophia is a fascinating display of the layers of religious history in Istanbul. With Eastern architecture shared by both faiths, such as the massive dome of the Hagia Sophia, the building houses numerous mosaics of the Virgin Mary and Jesus, John the Baptist, and other Christian saints as well as traditional stained glass windows. The conversion of the mosque involved popping a few minarets on the top and inside the museum, from the basilica roof hang several GIANT wooden medallions, which painted on them in Arabic calligraphy have the named of Allah, the prophet Mohammed, and the first four Islamic Caliphs, Abu Bakr, Umar, Uthman, and Ali, and Hussan and Husayn, the grandchildren of the prophet. These large medallions are hung from the ceiling from wires and chains; the Ottomans did not alter or modify the existing architecture to add these touches. Although they have been hanging for centuries, one cannot help but think that they look almost temporary. There is a paved part of the floor where many Muslim heads have touched the ground in worship, that also was the place where Byzantinian emperors were crowned. There is a Christian pulpit and alter and a Muslim minbar, where an imam would give his sermon.

What interests me is the way in which the layers of religion have come together- the fact that the Christ and Virgin Mary motifs were left intact, the giant Islamic medallions gingerly affixed to the structure so as to not damage the existing building. The minarets rise up from the Hagia Sophia non-invasively, as though they had been there all along. Beautiful fountains for Muslim ritual ablutions stand in the courtyard. There is an underlying sense of respect for what came before it in the design of the mosque conversion. There is a lack of the panicked tendency to erase the traces of the building’s past as the center of a Christian Empire. Muslim worship took place for centuries in a building where such obviously Christian symbols such as Jesus as Christ and the Virgin Mary watch down on worshipers.

I took 44 photos at the Hagia Sophia (a new record!) and to be honest, have no clue the best way to share that many with you all. I figured the best way was to go one by one, and explain them as I go. Let me know what you think! 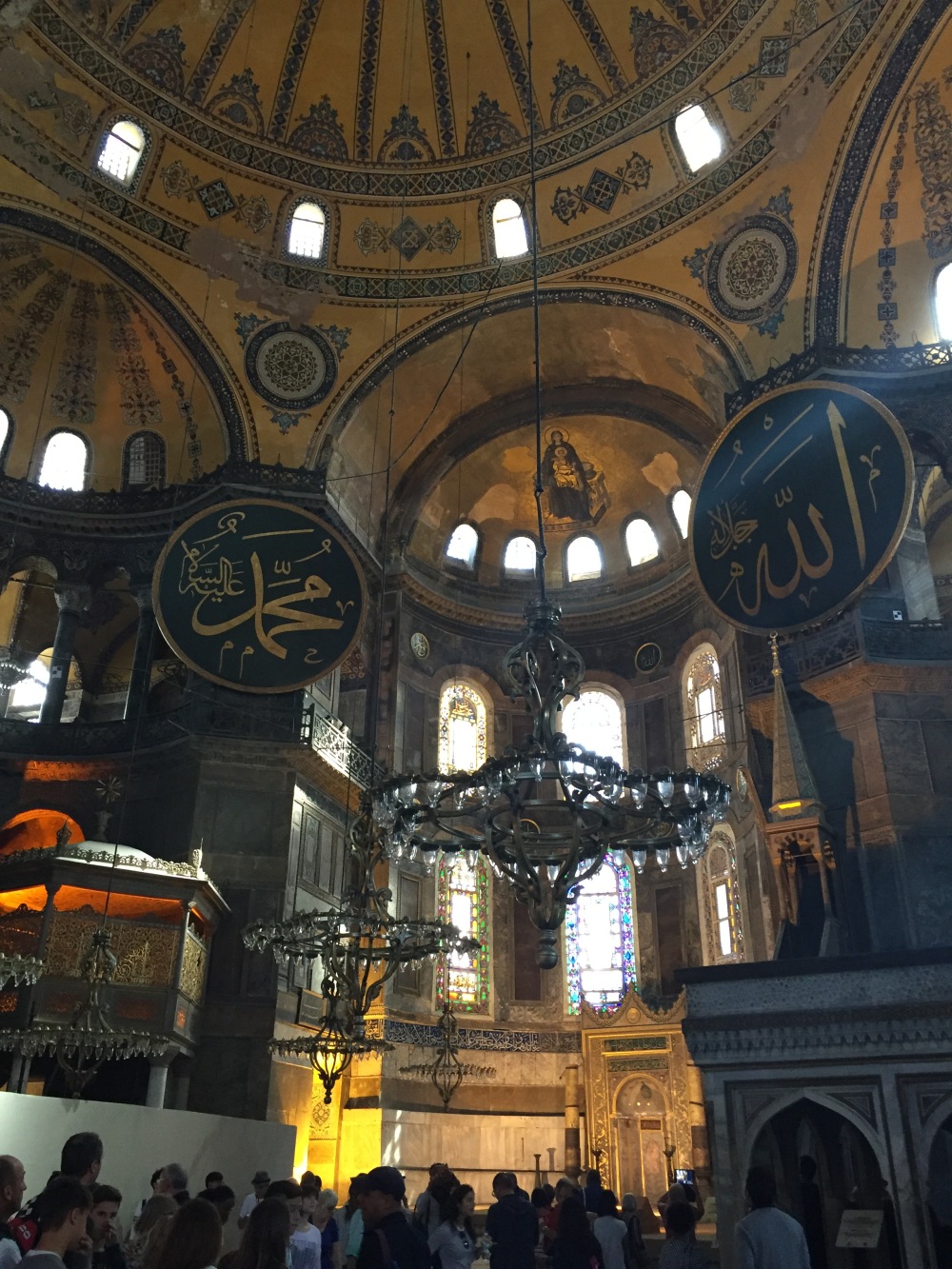 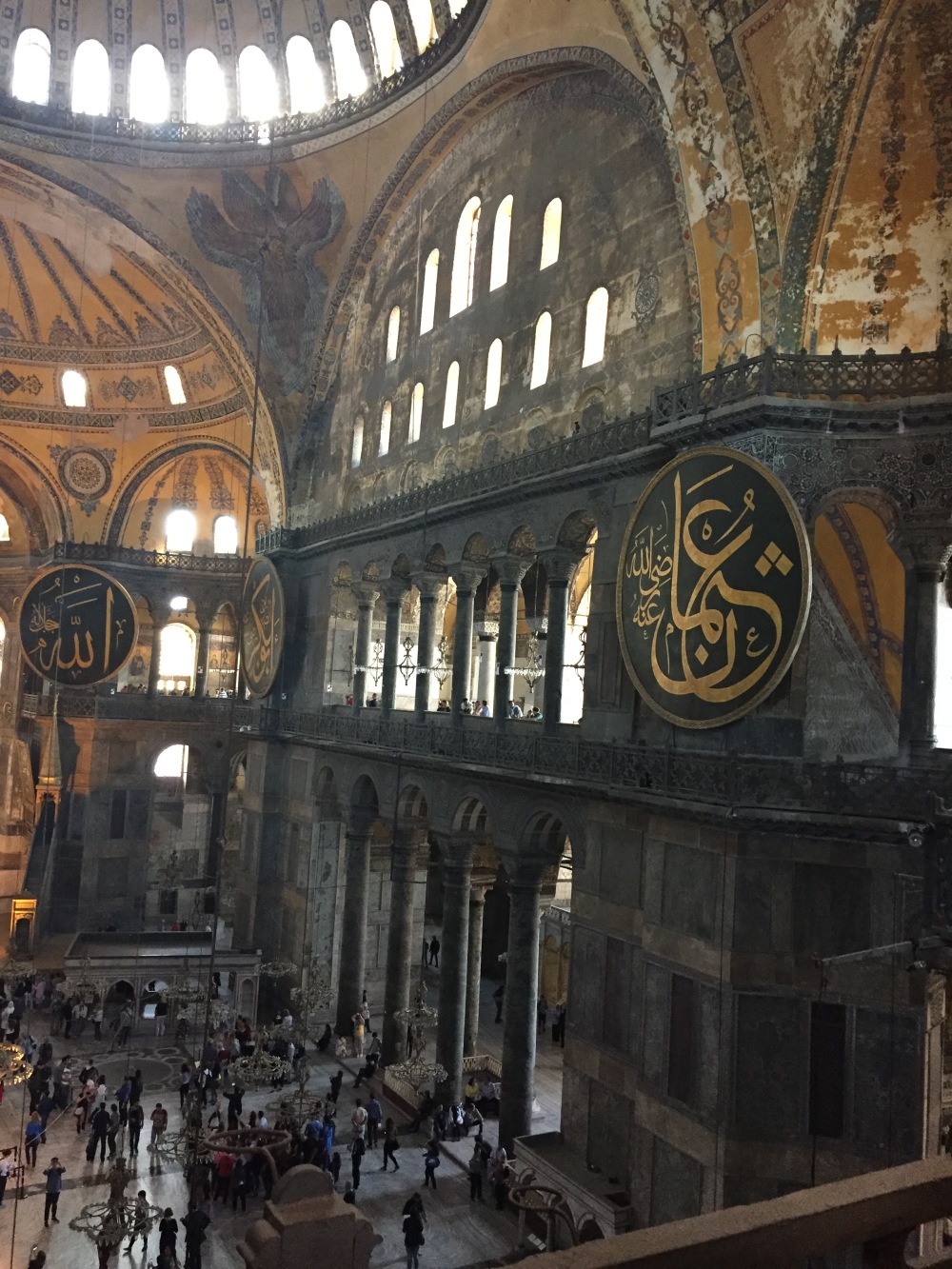 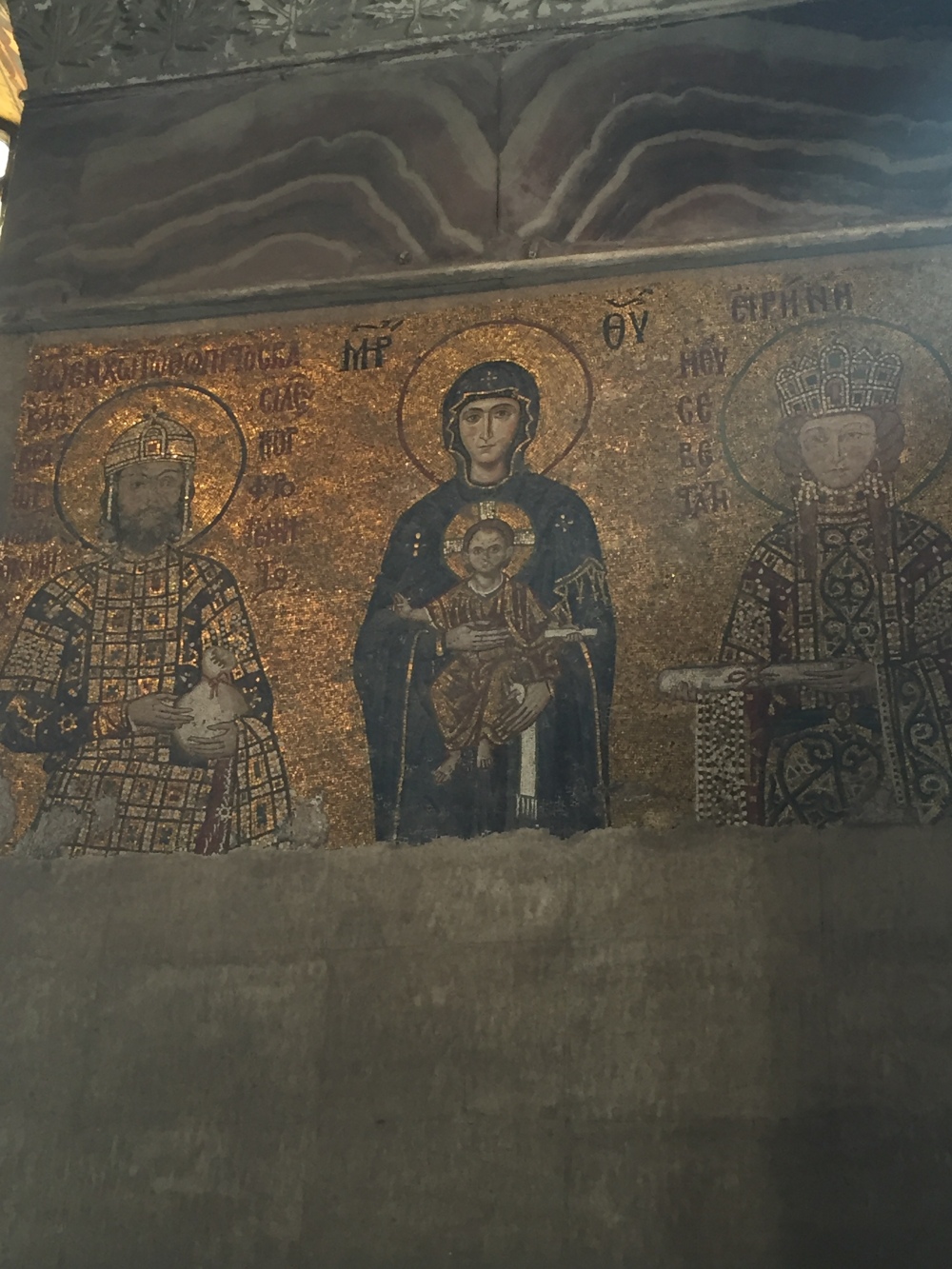 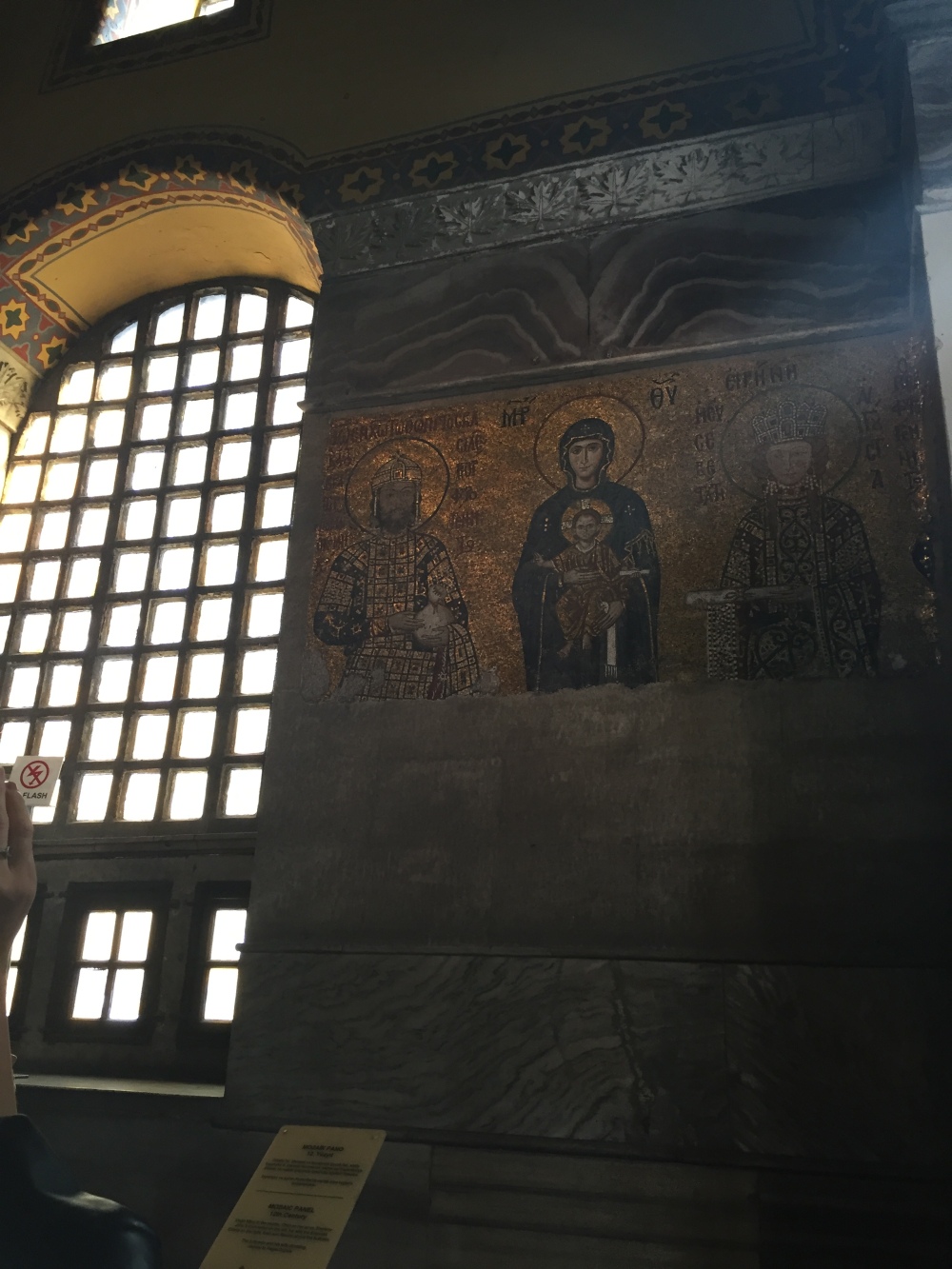 I hope you enjoyed this post and my photos! If you are in Istanbul, the Hagia Sophia is a must see.